We all watched the news in horror. Security videos captured the last seconds of a Florida condominium standing, then suddenly folding and finally collapsing in a heap of concrete and dust. The Champlain condo, in Surfside Florida, was home to hundreds of people. Days after the collapse, more than a hundred people believed to be inside are still unaccounted for, and presumed dead.

Even before the search and rescue operations came to a close, questions were being asked about the cause of the collapse.

Initial reports from inspections, both routine inspections and less frequent mandated ones, are starting to paint a sad picture about the collapse.

It was preventable. And the signs were there that it was coming, and people ignored those signs. 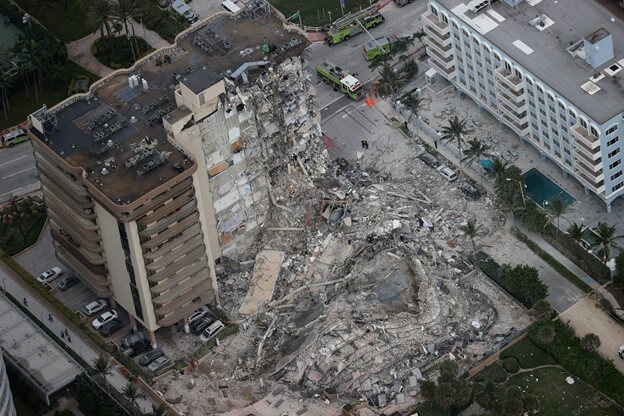 According to press reports, a pool inspector reported to his superior that he was seeing unusual amounts of water leaking under the building.

While it was not initially clear whether it was pool water, ocean water, or misdirected rain water, there is no confusion over what that meant. Mishandled water in building construction is a recipe for disaster.

Professional waterproofing experts know that it takes both the right design and the right materials, like Mar-Flex quality products, to keep water where it belongs.

When water reaches the steel rebar inside concrete pilings and supports, it immediately beings to eat away at the steel. The effect is faster if it is salt water, and if there are periods with and without water. This appears to be the case at Surfside, though a final determination has not been made.

Without the rebar inside to provide support, all the specifications for the strength of the concrete fly out the window. One fault at the bottom of a large tower means disaster for everything above it. That might be fine on the top floor, but in the basement level, it meant certain death for more than a hundred residents.

While not every building project is as tall as the Champlain Tower, every one with your company’s name on it and people inside represents an urgent need to attend to the details and do everything right.

PROS: IMPROVE YOUR BOTTOM LINE
WITH THE BEST WATERPROOFING PRODUCTS IN THE INDUSTRY